From Heraldry of the World
Your site history : Thermawear Ltd
Jump to navigation Jump to search 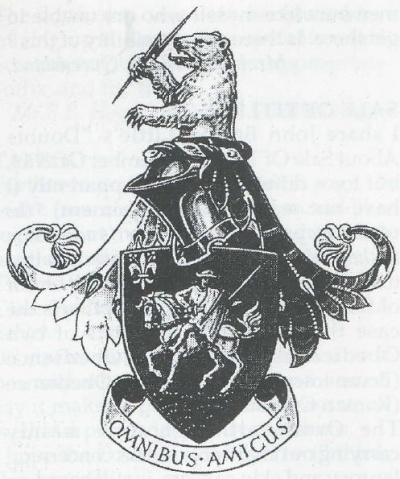 Arms: Azure on a terrace Vert an equestrian figure representing Saint Martin dividing with his sword his cloak proper his horse passant Argent mane and tail Or with harness and saddle proper issuing in the sinister canton a flash of Lightning in bend sinister Gules striking against St. Martin's cloak in the dexter canton a Fleur-de-lis seeded Gold.
Crest : Upon a Helm with a Wreath Argent and Azure a demi-Polar Bear proper grisping in the dexter paw a flash of Lightning Gules. Mantled Azure doubled Argent.
Motto: Omnibus Amicus

The arms were officially granted on April 7, 1994.

The arms show an image of Saint Martin cutting his cloak in half to symbolise the Company's involvement both in the manufacture of clothing and charitable activities. The fleur-de-lis in the dexter corner represents their French connection. The terrace Vert, as opposed to the more usual mount, refers to Thermawear's address - Bowling Green.

The demi Polar bear in the crest, holding the "Damart Flash", symbolises their specialisation in warm clothing and their contributions to Polar exploration.