From Heraldry of the World
Your site history : Ticino
Jump to navigation Jump to search 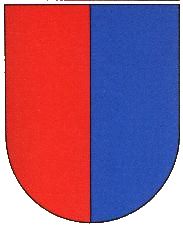 Ticino was conquered by the Swiss confederates in 1798 and became a separate canton in 1803. On May 23, 1803 the local council declared that the colours of the canton were red and blue and the seal should contain a seal with a shield divided in red and blue. The minutes of the meeting do not clarify why these colours were chosen.

Many attempts have made, however, to find a meaning for the colours. One of these explains the colours as the colours of the two main political parties at the time, the red for the liberals and the blue for the conservatives.

Another explanation is that the red is taken from the colour of Switzerland and the blue is taken from Italy, to which the area belonged before 1798. However, there was no 'Italy' in 1798, but many smaller states.
A third explanation shows that the colours are derived from the arms of Paris in France, as a symbol for Napoleon. The Swiss Confederation was at the time de facto ruled by the French.
A fourth theory explains the colours as the colours of the Swiss regiment in the Kingdom of Sardinia at the time, many of the soldiers came from Ticino.
A fifth, and more modern, theory explains that the colours are the most common colours in the local arms, together with silver. Addition of silver to the arms would, however, resemble the French colours too much, and so the white was removed.

All these explanations are (very) unlikely and thus the actual meaning is still unknown. Even tough the arms are not according to heraldic rules (colour against colour) the arms have never changed since.