From Heraldry of the World
Your site history : Trevelyan College (Durham University)
Jump to navigation Jump to search 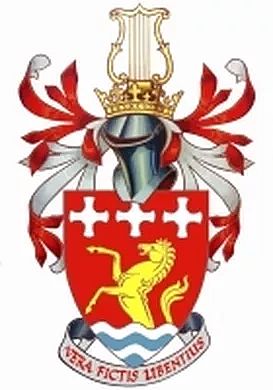 Arms: Gules, issuant from water in base harry wavy of four argent and azure a demi horse rampant Or, in chief three crosses of St. Cuthbert argent.
Crest: Out of a coronet composed of sixteen fleurs-de-lys set upon a rim, alternately large and small, a lyre Or.
Motto: Vera fictis libentius

The arms were officially granted on September 9, 1966.

If you have any information on these arms College (Durham University) mail us !