From Heraldry of the World
Your site history : Tsumeb Secondary School
Jump to navigation Jump to search 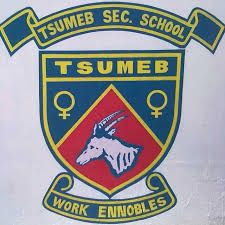 The two metallic symbols stand for the metal copper, found in great quantities in the mineralised pipe that was exploited for the better part of a century, first by German colonists who formed the Otavi Minen- und Eisenbahn-Gesellschaft (OMEG), and subsequently by the Tsumeb Corporation Ltd, under South African rule. The deepest levels of the mine can no longer be worked due to flooding. The water is potable, and is pumped as far as Windhoek, 432km away. The Tsumeb Corporation has ceased operations, but in recent years a new company, Ongopolo Mining, has been attempting to resume operations.

The antilope is a hartebeest.