From Heraldry of the World
Your site history : Twickenham
Jump to navigation Jump to search 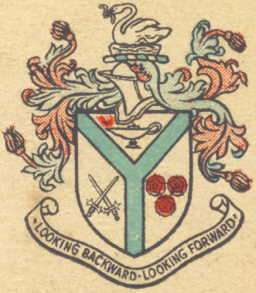 Arms : Argent a Pall Vert between in chief an Antique Lamp fired proper on the dexter side two Swords in saltire also proper pommelled and hilted Or and on the sinister side three Roses two and one Gules.
Crest : On a Wreath of the Colours upon Waves of Water a Swan holding in the beak an Eel all proper.
Motto: 'LOOKING BACKWARD LOOKING FORWARD'

The pall not only symbolizes the name of Twickenham (' the place where the two ways meet '), but also indicates the close historical connection with the See of Canterbury, on the arms of which the same charge appears. The lamp stands for Twickenham's interest in literature, the arts and the sciences, to all of which the town has given distinguished men, such as - Bacon, Dickens, Tennyson, Pope, Horace Walpole and Turner. The crossed swords, taken from the arms of the See of London, refer to the earliest historical record of Twickenham, namely of land here being granted to Waldhere, Bishop of London, in 704. The three red roses are from the arms of our great educational pioneer, William of Wykeham who built the tower of St Mary's Parish Church.

The waves refer, of course, to the River Thames which bounds the town for a distance of three miles, and the swan suggests the beautiful and tranquil character of the river hereabouts. The eel combines humour and history, for it signifies not only the old lamprey fishing industry of Twickenham but also the famous Eel Pie Island in the river opposite the gardens of York House.