From Heraldry of the World
Your site history : Twyford School
Jump to navigation Jump to search 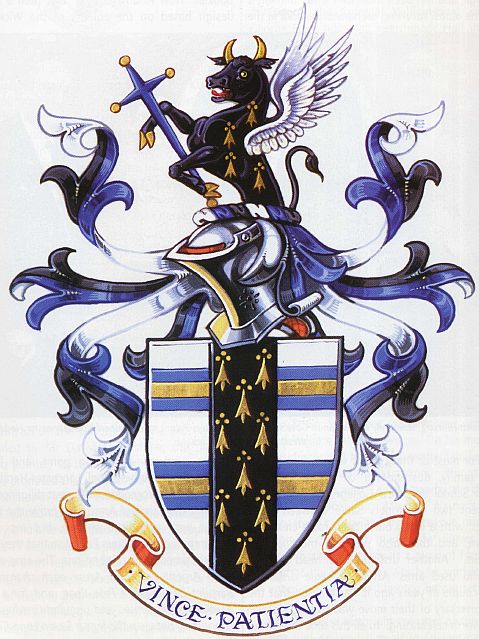 Arms: Argent two Bars Azure each charged with a Barrulet Or overall a Pale Pean
Crest: A demi-Bull Pean armed and unguled Or winged Argent supporting between the legs a Saxon Long Cross Azure pommelled Or.

For a long time the school was owned by the Wickham family, descendants of the founder of Winchester School and New College, Oxford, whose arms are: Argent two chevronels Sable between three roses Cules, with a black bull's head for a crest, and they also provided most of the headmasters. Another distinguished head was Dr Kitchin, who used arms: Azure an eagle displayed Argent. The crest uses elements from the Wickham and Kitchin arms with the addition of a Saxon Long Cross to indicate both the Christian basis of the school and the fact that a Saxon burial ground was uncovered when foundations were being dug for a new building.

The motto (literally "Patience wins") had been used by the school for some time, often in the form of an English version, "lt's dogged as does it" but it was thought that Latin would be more appropriate for a school that still teaches that language. The sense of the motto was in connexion with the fable of the Hare and the Tortoise.