From Heraldry of the World
Your site history : Union Discount Company
Jump to navigation Jump to search 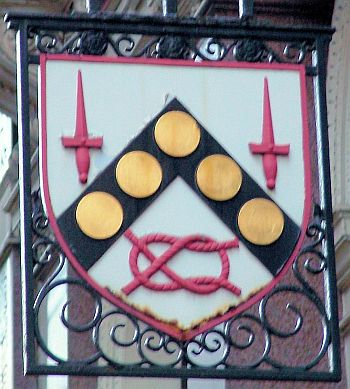 Arms: Argent, on a chevron sable between in chief two swords erect and in base a sheet bend knot of rope gules, five bezants.
Crest: On a wreath of the colours, Issuant from flames proper a demi lion guardant gules gorged with a collar counter-compony argent and sable, holding between the paws a bezant charged with a cock's head erased also sable combed and wattled also gules.

If you have any information on these arms Discount Company mail us !