From Heraldry of the World
Your site history : United Kingdom Atomic Energy Authority
Jump to navigation Jump to search 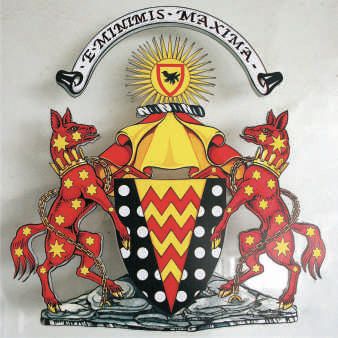 Arms : Sable semee of plates, a pile harry dancetty Or and gules.
Crest: On a wreath argent and sable, A sun in splendour of thirty-two points Or charged with a voided escutcheon gules, therein a martlet sable.
Supporters: On either side a pantheon gules, unguled Or, semee of mullets, thirteen of six points, two of seven, and gorged with a crown palisado, affixed thereto and reflexed over the back a chain gold.
Motto: E minimis maxima.

The arms were officially granted on April 12, 1955 to the Atomic Energy Commission.

Atomic energy is produced inside a pile. This is a rectangular block of graphite into which scores of uranium rods have been inserted; this is pictured heraldically by the field of the shield. The heraldic pile is intended to symbolize the series of nuclear fissions which take place within the atomic pile and which generate atomic energy consequent upon the rapid movement of neutrons from uranium nucleus to uranium nucleus.

The sun is a symbol of heat and energy. It is charged here with a martlet within a voided escutcheon in allusion to Lord Rutherford, the pioneer of atomic research, in whose arms a martlet twice appears.

In ancient records pantheons invariably appear spangled with stars and this feature, coupled with the name itself, suggests that in the past they were meant to typify the natural powers of the universe, making them logical supporters. The number of the points of the stars on each pantheon total 92; for uranium, the vital raw material, has 92 electrons. Each pantheon is gorged with a crown palisado, a form deriving from the stockade or palisade of a fortified enclosure, and this in conjunction with the chain attached to it provides a symbol of defence or control and of the harnessing of the atom to many purposes.

The motto "E Minimis Maxima" can be translated as 'A lot out of something very small' and evokes the amount of energy from a tiny atom.