From Heraldry of the World
Your site history : Université de Sherbrooke
Jump to navigation Jump to search 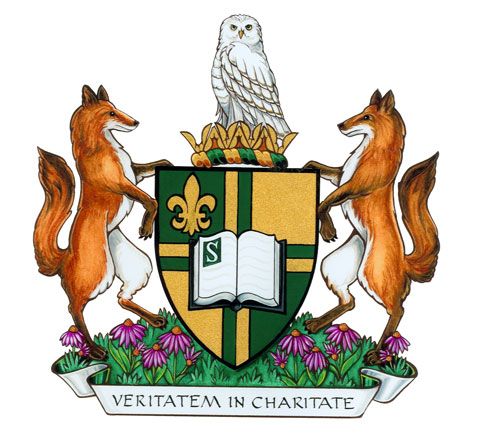 The quarters are reminiscent of the Eastern Townships, the name formerly given to the Quebec territory south of the St. Lawrence River, between the Richelieu and Chaudière Rivers. It is parcelled out into townships with Sherbrooke as its largest city. The official colours of the Université de Sherbrooke are green and gold. The cross represents the Catholic faith of the founders and the book symbolizes knowledge. The fleur-de-lis represents the ancestral cultural and national traditions that are still alive in Sherbrooke.

The snowy owl is the avian emblem of the province of Quebec. It is a rare animal that winters in southern Quebec and possesses a remarkable capacity to adapt to its environment in order to survive. It evokes the splendours of winter. For the university, it is a symbol of wisdom, perception and purity. It is also a reminder of the importance of conserving the environment. The maple seeds convey life and, symbolically, knowledge. They are lively fruit, full of movement and momentum, and suggest the promise of development, blossoming and growth. Seeds also represent the tree that will take root, grow and produce new seeds in the next cycle of life. The seed is a symbol that goes hand in hand with the university’s fiftieth anniversary and is associated with its history of boldness. As a symbol of maturity and promise for the future, it refers to the university’s environment and natural living space.

For the university, the fox is a symbol of intelligence, finesse, liveliness, and speed. A shrewd and confrontational animal, the fox has the remarkable capacity to turn any situation to its advantage. It is also the symbol of the university’s “Vert & Or” sports teams. Echinacea is the floral emblem of the city of Sherbrooke.

The Latin motto translates into “Truth in love”. It reflects the intrinsic quality and virtue of the Université de Sherbrooke and is characteristic of the human community that forms it. It also refers to the university’s mission that focuses on open training, the promotion of critical learning and the quest for new knowledge through teaching, research, creativity and social commitment.