From Heraldry of the World
Your site history : Université du Québec à Trois-Rivières
Jump to navigation Jump to search 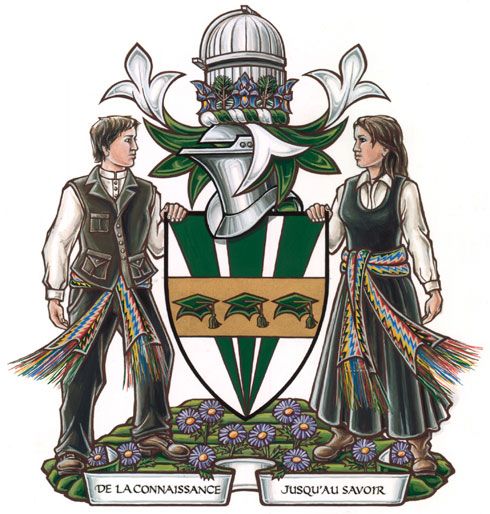 Arms: Argent three piles throughout conjoined in base Vert, on a fess Or three mortarboards Vert
Crest: Issuant from a circlet of iris versicolor flowers and white pine branches, the observatory of the Pierre-Boucher building proper
Supporters: A Patriote man and a Patriote woman standing on a grassy mount set with flaxleaf asters proper
Motto: DE LA CONNAISSANCE JUSQU’AU SAVOIR

Green has designated the Université du Québec à Trois-Rivières (UQTR) since its foundation. The three green bands represent the city of Trois-Rivières, named for the delta configuration of the Saint-Maurice River at its confluence with the St. Lawrence River. The arrangements of these bands, which widen towards the top, represent the dissemination of knowledge from the university to the world. They evoke the UQTR’s current logo, which is made up of three parallel, inclined green bands. Like the logo, the bands on the shield represent the three types of institutions united under the Université du Québec (the university branches, the research institutes and the colleges), the three levels of postsecondary studies (bachelor’s, master’s and doctorate), and the three components of the university community (the students, the faculty and the support staff). The bridge represents the acquisition of knowledge at UQTR, as well as the passage from formal studies to the workforce. It also recalls the Laviolette bridge, named for the founder of Trois-Rivières, which spans the St. Lawrence River and brings together the university’s two partners regions, Mauricie and central Quebec. The three mortarboards represent the graduates from the various levels of studies, a sense of belonging to the university community and the success of UQTR graduates. They also symbolize UQTR’s three missions: teaching, research and community service. Their number also evokes the name Trois-Rivières.

The observatory at UQTR’s Pierre-Boucher building is used here as a symbol of openness to the world and is one of the university’s best-known architectural landmarks. The iris versicolor is the floral emblem of Quebec. The white pine branches evoke the pine tree nursery of the Michel-Sarazin building. The white pine is an important symbol on the campus, as it evokes the planting of a commemorative pine marking the 35th anniversary of the founding of the university, in 2004.

The Patriotes, wearing clothes from the time of the 1837-1838 rebellion, represent UQTR’s various sports teams, who proudly bear this name. The compartment’s uneven ground recalls that Trois-Rivières was developed on a series of hills separated by steep slopes that rise up by terraces from the St. Lawrence River and the Saint-Maurice River. The flaxleaf aster is the floral emblem of Trois-Rivières. The aster begins to blossom in mid-August, corresponding to the students’ arrival on campus at the beginning of the school year.

The French motto means “From learning to knowledge”.