From Heraldry of the World
Your site history : University College Cork
Jump to navigation Jump to search 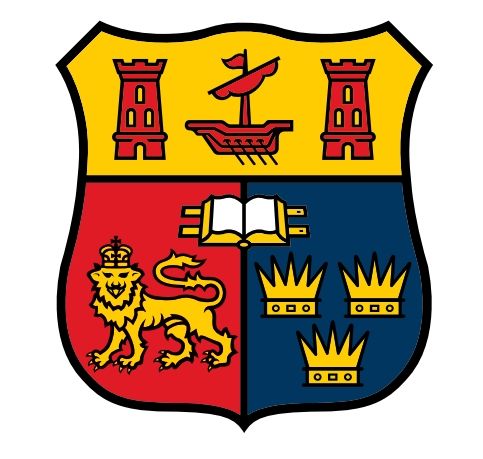 Per pale Gules and Azure on the dexter side a Lion statant guardant imperially crowned Or on the sinister side three eastern Crowns proper; on a Chief of the Third an ancient Ship between two Castles in fesse of the first, in centre chief point an open Book Argent garnished of the Third. With the Motto “Where Findbarr Taught, Let Munster Learn”.

The arms feature the royal crest of the United Kingdom, referring to the charter establishing the Queen’s College, and the arms of the Province of Munster. Over these is placed an open book, a symbol of education. The chief is derived from the arms of the City of Cork, not officially registered until sixty years later, featuring a ship between two towers.

St. Finnbarr, patron saint of the city of Cork, was said to have established a monastery and school at Gill Abbey Rock, near the location of the modern university. This is recalled by the motto, although a variant form of his name is used.