From Heraldry of the World
Your site history : University of Auckland
Jump to navigation Jump to search 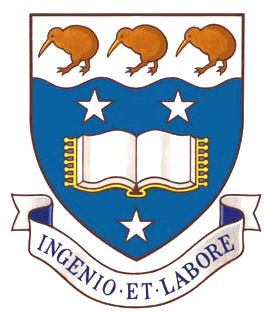 Azure, between three mullets Argent, an open book Proper edged and bound Or with seven clasps on either side Gold, on a chief wavy also Argent, three kiwis Proper.

The arms were granted on 15 February 1962, and are recorded in the College of Arms, London.

The three stars might be derived from the arms of the Anglican Bishopric of New Zealand or that of Auckland, which in turn, were possibly derived from the constellation of the Southern Triangle (Triangulum Australe). The positioning of the stars around the book is reminiscent of the crowns and book in the arms of Oxford University.

The kiwis are flightless birds which are indigenous to and signify New Zealand; the wavy chief represents Auckland's coastal location.

The motto may be translated from Latin as "By natural ability and hard work".