From Heraldry of the World
Your site history : University of Bath
Jump to navigation Jump to search 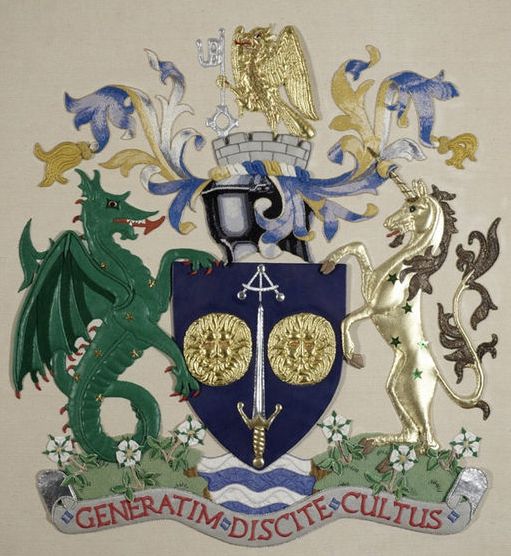 Arms: Azure, a sword in pale argent, hilt and pommel and quillons Or, the point ensigned by a Watt governor proper, between in fess two heads of Sul Or.
Crest: On a wreath Or, argent and azure, Out of a mural crown argent, an eagle, wings expanded and inverted, Or, supporting with the dexter claw a key, wards upward and outward, silver.
Supporters: On the dexter side a wyvern erect vert charged on the body with mullets, each of six points, Or; and on the sinister side a unicorn sejant erect Or, armed, unguled, crined and tufted sable, charged on the body with mullets of six points vert; the whole upon a compartment of water harry wavy of four argent and azure between two river banks proper, sprouting therefrom roses argent, barbed seeded, slipped and leaved proper.
Motto: Generatim discite cultus.

The arms were officially granted on November 15, 1966.

Sul was a Celtic God identified by the Romans with their own Minerva, and Bath was known as Aquae Sulis. The choice of Sul depicted by a conventional rendering of his head as found carved at Bath is fitting indeed, and it can be distinguished from a sun in splendour by the fact that the face is moustached, and eared, and the hair thereof is entwined with and blends with wavy rays of heat that surround the whole.

A Watt Governor is a device designed in 1788 by James Watt who adapted a older type of governor to control his steam engine where it regulates the admission of steam into the cylinder. It is used here as a symbol for a technical university.

I have no information on the other elements.