From Heraldry of the World
Your site history : University of Birmingham
Jump to navigation Jump to search 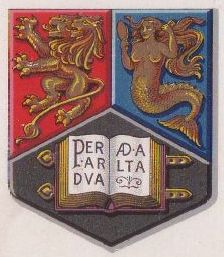 Per chevron, the chief per pale gules and azure, in dexter a lion rampant with two heads, in sinister a mermaid holding in the dexter hand a mirror and in the sinister a comb Or, the base sable charged with an open book proper, with two buckles and straps and edges of the third, inscribed "Per ardua ad alta".

The double-headed lion and mermaid are taken from the device used by Mason’s Science College, the lion originally being the arms of the Founder Sir Josiah Mason, with the mermaid taken from his crest, see image below. 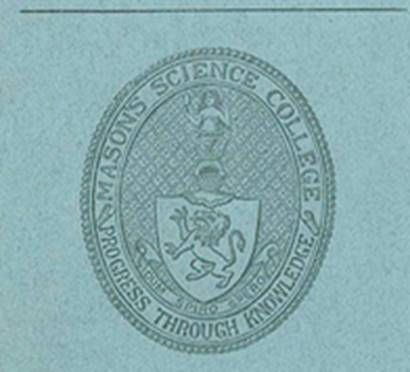 The open book is a common symbol for universities and schools. The motto "Per ardua ad alta" means "Through hardship, great heights are reached".

The arms can be seen on the campus, with the arms of Sir Josiah Mason, who in 1875 founded Mason Science College, the university's predecessor; and the arms of Lord Calthorpe, who gifted the land which now forms the campus: