From Heraldry of the World
Your site history : University of Central Lancashire
Jump to navigation Jump to search 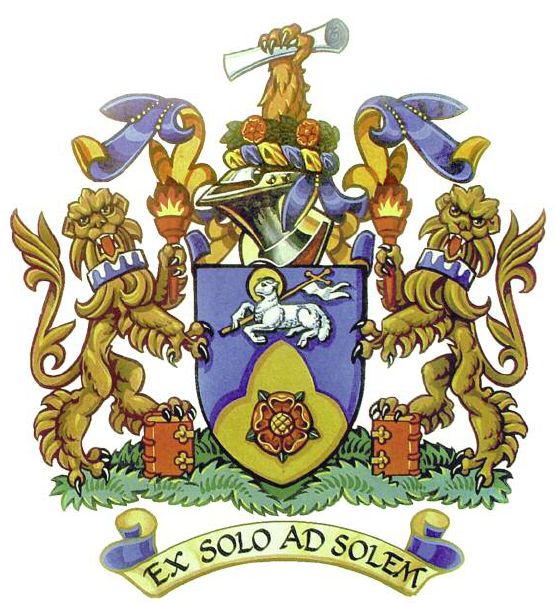 Arms : Per chevron invected of two points downwards Azure and Or in chief a Paschal Lamb couchant Argent nimbed and supporting a Cross staff Or flying therefrom a Pennon Argent and in base a rose Gules barbed and seeded proper.
Crest : issuant from a Chaplet of roses sans barbs two being manifest Gules leaves Sable a Lion’s Gamb holding a Scroll proper.
Supporters : On either side a Lion guardant proper gorged with a Collar Vair holding in the interior fore paw a Torch Gules enflamed proper and resting the interior hind paw on a Closed Book bound Gules edged and clasped Or the whole upon a compartment comprising a Grassy Mound vert.

The upper part of the shield refers to the new city of Preston, represented by the paschal lamb and flag, which appear on the Preston coat of arms, and the background to the upper part is azure which is also the field of the Preston City arms.

The Lancashire County Council coat of arms has two collared lions as supporters which are adopted here as supporters of the University arms. However to make the distinction the lions faces are affronty which by all accounts indicate the openness of the University. The lions are also shown holding torches and supporting closed books symbolising the quest of higher learning.

The crest is a lion’s fore paw holding a scroll, indicating the University’s authority to award degrees. The fore paw is shown issuing from a wreath of red roses and black leaves which refer to the logo of the former Lancashire Polytechnic. In fine the motto Ex Solo Ad Solem, meaning from the ground to the sun, is taken from the Harris Institute arms. This implies an exhortation for students to develop their full potential, which is declared to be the prime purpose of the University.