From Heraldry of the World
Your site history : University of East Anglia
Jump to navigation Jump to search 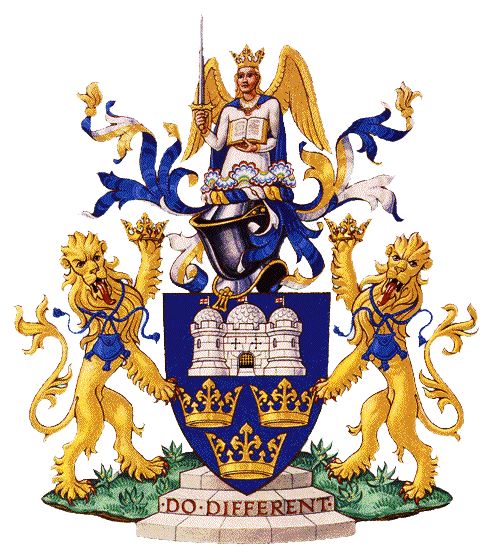 Arms : Azure, three ancient crowns Or, in chief a castle of three domes argent, flying from each the banner of St. George, the port sable, portcullis raised Or.
Crest: On a wreath argent, Or, and azure, Issuing from clouds proper an angel vested argent, mantled azure, winged, crined and crowned Or, holding in the dexter hand a sword erect proper, hilt and pomel Or, and in the sinister hand an open book also proper, edged, bound and leathered Or.
Supporters: On either side a lion guardant Or, pendent from the neck by cords tasselled a purse azure, and holding with the interior paw an anciencrown gold.
Motto: Do different.

The castle is taken from the Arms of Norwich. The three gold crowns are incorporated as the traditional emblems of East Anglia, being the crowns of St. Edmund the first King of the East Angles; representing his sovereignty, martyrdom and innocence.

The lions are the supporters not only because the University has a Royal Charter, but also because a lion appears in the Arms of Norwich. The lions are made peculiar to the University by their supporting by the interior paw a crown as in the arms. Also to commemorate the fact that Lord Mackintosh of Halifax was the University's first Chancellor, about the neck of each lion pendent from tasselled cords, there is a purse. This appeared in Lord Mackintosh's own arms as an indication of the part he played in the National Savings Movement.

The Motto is a shortened version of the old saying of "people in Norfolk dew things different".