From Heraldry of the World
Your site history : University of East London
Jump to navigation Jump to search 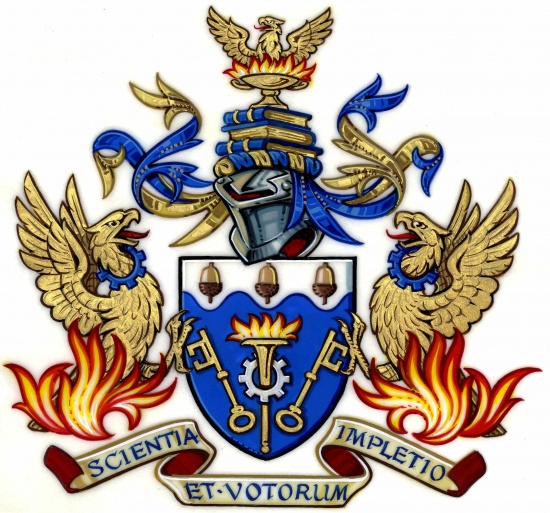 Arms: Azure a Torch enflamed Or enfiling an Annulet embattled on the outer edge Argent between two Keys in pile the wards upwards and outwards Or on a Chief wavy Argent three Acorns proper.
Crest: Upon a Helm with a Wreath Or and Azure Upon a pile of three Closed Books fesswise those at the top and bottom with their spines to the dexter and that in the middle with its spine to the sinister Azure edged and garnished Or a Kylix issuant therefrom a Phoenix Or the flames proper.
Supporters: On either side A Phoenix Or the flames proper gorged with an Annulet embattled on the outer edge Azure.
Motto: Scientia et votorum impletio.

If you have any information on these arms of East London mail us !