From Heraldry of the World
Your site history : University of Glamorgan
Jump to navigation Jump to search 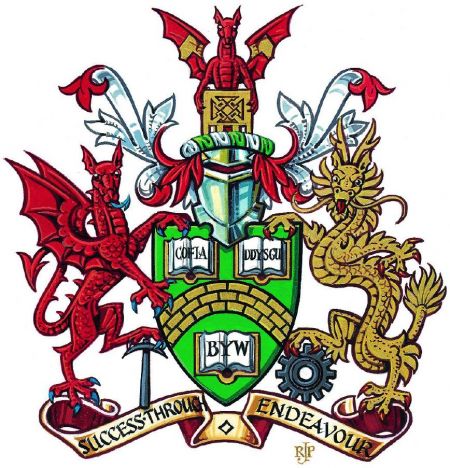 A symbolic depiction of Pontypridd’s historic bridge appears in the centre of the shield, while the three books bear the words “Cofia Ddysgu Byw.” The word are those of Rhondda miner and poet Ben Bowen (1878 – 1902) and mean “remember to learn to live” which was the motto of the Glamorgan College of Education at Barry incorporated into the institution in 1975.

The crest features the Welsh dragon with outstretched wings holding a gold computer ferrite memory store matrix, representing the technological aspects of the University and the marriage of old with new.
Each of the dragon’s wings is charged with a gold chevron which refers to Iestyn ap Gwrgan, the last King of Glamorgan and to the mediaeval family of De Clare, Lords of Glamorgan. From the helm hangs the mantle in red and silver, the livery colours attributed to Iestyn ap Gwrgan.

Supporting the shield are two dragons, which represent Wales and the Orient, reflecting the international nature of the University. The pickaxe and cogwheel symbolise not only the heavy industries which fuelled the development of the Welsh economy, but also the vocational nature of the courses offered at Glamorgan.

Literature: Image and information from a brochure issued by the university