From Heraldry of the World
Your site history : University of Hull
Jump to navigation Jump to search 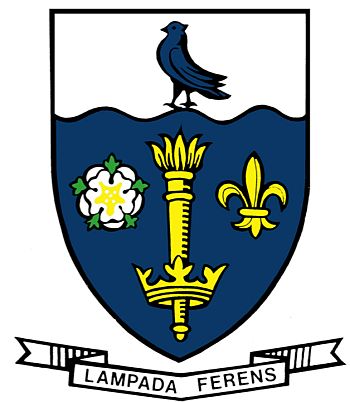 Arms : Azure, a torch fired and enfiled with a ducal coronet Or between on the dexter a rose argent, barbed and seeded proper, and on the sinister a fleur-de-lys of the second; on a chief wavy of the third a dove of the first.
Motto: Lampada ferens

The torch is a general symbol of learning an enlightenment, the crown is taken from the arms of Hull. The rose and the fleur-de-lys represent the counties of Yorkshire and Lincolnshire respectively. The university traditionally attracted students from these 2 counties.

The wavy chief refers to the Hull and Humber rivers. The dove is taken from the arms of Thomas Ferens, the founder of University College Hull in 1928.

The motto means Carry the light and is a reference to Thomas Ferens as well as the torch in the arms.