From Heraldry of the World
Your site history : University of Kent
Jump to navigation Jump to search

UNIVERSITY OF KENT (formerly the University of Kent at Canterbury) 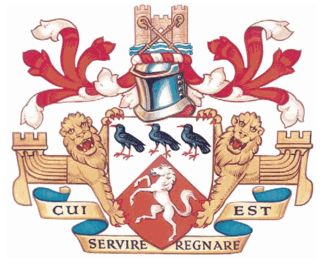 Arms: Per chevron argent and gules, in chief three Cornish choughs proper, and in base a horse rampant argent.
Crest: On a wreath of the colours In front of a representation of the West Gate of the City of Canterbury proper issuant from water harry wavy of four argent and azure, two crosiers in saltire Or.
Supporters: On either side a lion passant guardant dimidiated with the hull of an ancient ship Or.
Motto: Cui servire regnare est.

If you have any information on these arms of Kent mail us !