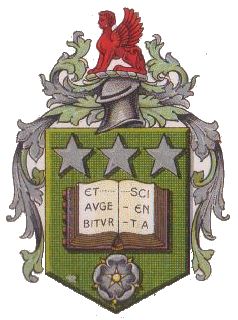 Arms: Vert, an open book proper, edged and clasped gold, inscribed with the words "Et augebitur scientia", between in chief three mullets argent and in base a rose of the last barbed and seeded proper.
Crest: On a wreath of the colours, A Greek sphinx gules.

The white rose, of course, refers to Yorkshire.

The sphinx and motto both come from an unofficial coat of arms used by the Yorkshire College before it became the university, see below. 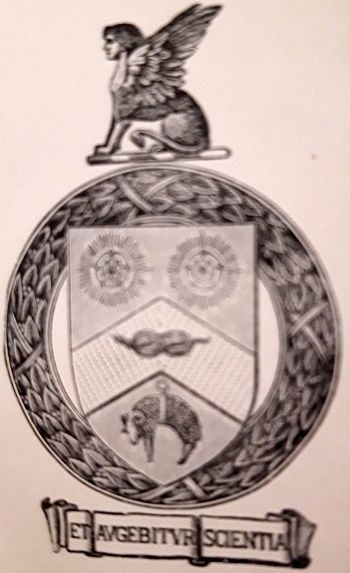 The blazon is given in the college’s calendar (1904-1905):
Gules a chevron or, thereon a serpent coiled [actually nowed] proper, between in chief two roses of York irradiated argent and in base a fleece or.
Crest: On a wreath gules and argent [!] a Greek sphinx sejant gules.
Motto: Et augebitur scientia (And knowledge shall be increased).

The serpent comes from the arms of the Cavendish Dukes of Devonshire, one whom was patron of the college.

The arms were not registered with the College of Heralds because, when the design was approved, the fee for registration was greater than the Yorkshire College felt justified in paying.”