From Heraldry of the World
Your site history : University of Leicester
Jump to navigation Jump to search 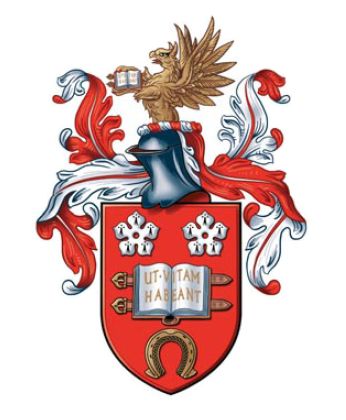 Arms : Gules, an open book strapped proper and buckled and inscribed with the words "Ut Vitam Habeant" in letters Or, between in chief two cinquefoils pierced ermine and in base a horse shoe also Or.
Crest: On a wreath of the colours, A demi­ gryphon segreant Or holding between the claws an open book as in the Arms.

The arms were officially granted on April 3, 1922 to the Leicester, Leicestershire and Rutland College. Transferred to the new university in 1957.

The one 'cinquefoil pierced ermine' represents Leicester City; the other, Leicestershire. The golden horseshoe represents Rutland.

The open book symbolises a university or college.

The motto 'ut vitam habeant' ('that they may have life') identifies this University.

The golden demi-gryphon, is taken from the arms of the late Mr Thomas Fielding Johnson, who donated the first building and a sum of money to the new college.