From Heraldry of the World
Your site history : University of Lincoln
Jump to navigation Jump to search 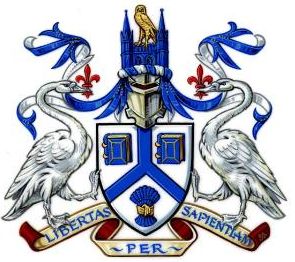 The reversed pall is a representation of rivers and canals, so important to the history of Lincoln, and the wider county. The reversed Y shape symbolizes the conjunction of different bodies that formed the university, the junction of river and canal, and also the joint creative endeavour typified by the university. The shape is a powerful one, with a strong upward and thus forward momentum. It can thus be taken to signify being based firmly upon roots, and history, but looking forward to the future and modernity.

The books to either side represent learning and knowledge: the learning of the past to one side, and that of the future to the other.

The wheatsheaf at the foot of the shield shows how the county is rooted in agricultural endeavour. It also refers to growth, to harvest (hence results); and this device also appeared in the Arms of the Parts of Holland and Parts of Lindsey, formerly administrative divisions of Lincolnshire.

The tower in the crest is a visual reference to the towers of Lincoln Cathedral, and thus to the history of the city, and of ecclesiastical learning there. It also refers to culture more generally. The prospect from the top of a tower alludes to strength of vision, to adventure.
The peregrine falcon alludes to the birds which nest in the tower, but also to strength and flight, so important to Lincolnshire as RAF County. The falcon also represents far sightedness and preparedness for office or important work.

The swans are a reference to the fauna of Lincolnshire and alludes to St Hugh of Lincoln. The swans each hold a fleur-de-lys derived from the arms of the city of Lincoln; this itself probably refers to the Cathedral, dedicated to the Virgin Mary. I

The motto ‘Libertas per Sapientiam´ means ‘Through Wisdom, Liberty’. Wisdom resonates with Minerva as the Roman Goddess of Wisdom, while Liberty refers, among other things, to intellectual freedom and resonates with the presence of one of the four remaining original 1215 versions of the Magna Carta in the City of Lincoln.

Literature: Image and infformation from here