From Heraldry of the World
Your site history : University of Natal
Jump to navigation Jump to search 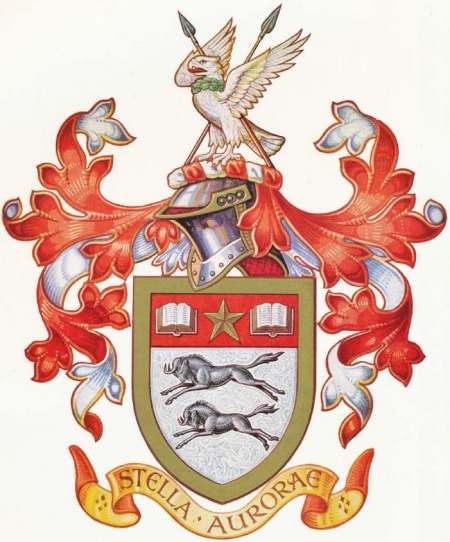 For the arms argent two black wildebeesten in full course in pale proper on a chief gules between two open books also proper edged or bound of the first a mullet gold all within a bordure of the last and for the crest on wreath argent and gules an eagle wings elevated and addorsed argent gorged with a wreath of oak vert standinq between two assegais crossed over its back in saltire proper.

The arms comprise two black 'Wildebeeste' (or Brindled Gnus) are taken from the arms of the Province of Natal, animals which once formed an important element of the fauna of Natal, as of other parts of Southern Africa. They are portrayed in rapid motion symbolising movement, progress.

The colour of the chief is the scarlet of the gowns of Doctors, the highest academic ranks in the University. This colour is repeated, together with the silver of the shield, in the mantle and wreath. Senior Doctorate gowns of the University are of scarlet with deep beil-sleeves lined with silver.

The five-pointed star is taken from the old arms of the Natal University College, symbolising the land of Natal discovered and named on Christmas Day 1497. This theme is repeated in the motto "Stella Aurorae", "Star of the Dawn" or "Star of the Rising Sun", symbolising the role of the University in dispelling the darkness of ignorance and evil; and standing forever on the threshold oi the brightening day.

The eagle is taken from the arms of Sir Theophilus Shepstone, and his outstanding contributions to the people of Natal. The white eagle with outspread wings, in the act of "taking off" to soar into the heavens beyond the present sight of mortal man, also reiterates the motif of the golden star "Stella Aurorae".

The crossed assegais are, of. course, a tribute to Sir Theophilus Shepstone whose labours in Natal contributed so largely to bringing peace and contentment to the Zulu peoples. Their incorporation in the crest of the University, may perhaps be indicative of the role which the University is pledged to play in carrying on that work by bringing enlightenment and peace and prosperity which are the partners of knowledge and wisdom to all the peoples whom the University serves.