From Heraldry of the World
Your site history : University of New England
Jump to navigation Jump to search 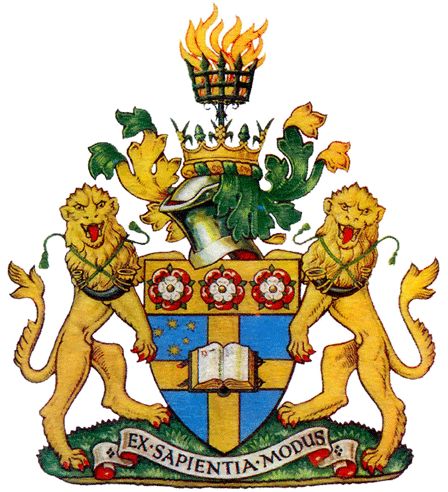 Azure a Cross Or surmounted of an open Book proper bound and clasped Sable edged of the second in the first quarter a representation of the Constellation of the Southern Cross on a Chief Gold three Tudor Roses Argent on Gules barbed and seeded also proper And for the Crest On a Wreath Or and Vert Issuant from a Coronet composed of sprigs of Wattle Vert fructed Or and Acorns also Vert set alternatively upon a Rim also Or a Cresset Sable enflamed Gold And for the Supporters On either side a Lion guardant Or each gorged with a Cord tasselled Vert pendent therefrom a Bugle Horn Sable garnished Gold.
Motto : EX SAPIENTIA MODUS

The name of the University and of the surrounding country naturally calls for emblems associating Australia with England. These therefore include, not only the Southern Cross and the Tudor roses in the Arms, but also, in the Crest coronet, the alternate sprigs of wattle, for Australia, and acorns, for England and English oak.

Similarly, the Supporters are lions, for England, bearing hunting horns from the Arms of the Forster family, on a green cord to represent that family's livery colour, the late Mr T. R. Forster of Abington, Armidale, having been the founder of the University.

The 'Cresset Sable enflamed Gold', representing Learning, is a departure from the usual books and torches included for this purpose. The motto is from Tacitus (Agricola 4.5).