From Heraldry of the World
Your site history : University of Northern British Columbia
Jump to navigation Jump to search 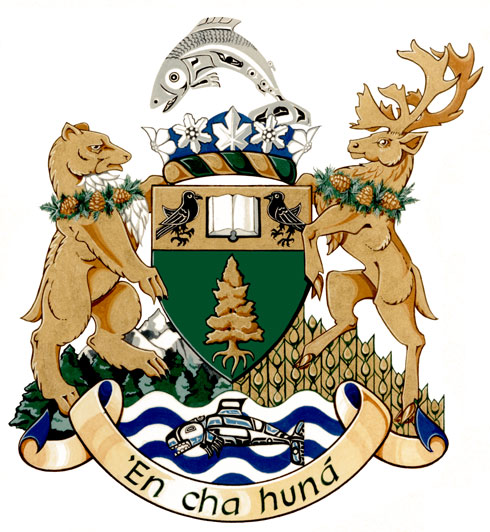 Arms : Vert a coniferous tree eradicated Or on a chief also Or an open book proper bound Sable between two ravens respectant also Sable.
Crest : Rising from a circlet of maple leaves snowflakes and dogwood flowers set alternately all Argent a wave Azure leaping therefrom a salmon as styled by Ron Sebastian.
Supporters : Upon a compartment rising above barry wavy Argent and Azure charged with a killer whale as styled by Ron Sebastian per pale dexter a forest Vert beneath mountain peaks Argent sinister a field of ears of grain Or embellished Vert dexter a female kermodei bear (Ursus americanus kermodei) Or chested Argent gorged with a collar of conifer branches Vert fructed Or sinister a woodland caribou buck (Rangifer tarandus caribou) Or gorged with a like collar.
Motto: 'EN CHA HUNÁ

The motto (in Carrier) means "Respecting all forms of life".

If you have any information on these arms of Northern British Columbia mail us !