From Heraldry of the World
Your site history : University of Nottingham
Jump to navigation Jump to search 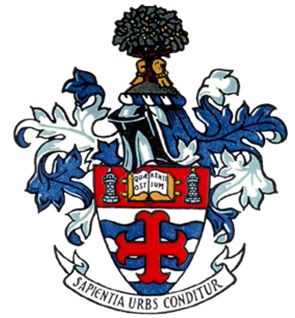 Arms : Barry wavy of six argent and azure, a cross moline gules; on a chief of the last an open book proper clasped Or inscribed with the words 'Quarente Ostium', in Roman characters sable between two domed towers also proper, that to the dexter ensigned with an increscent of the first and that to the sinister with an estoile, also Or.
Crest : On a wreath of the colours, On a mount vert an oak tree proper, fructed Or, between two garbs resting against the trunk gold.
Motto: Sapientia urbs conditur.

If you have any information on these arms of Nottingham mail us !