From Heraldry of the World
Your site history : University of Queensland
Jump to navigation Jump to search 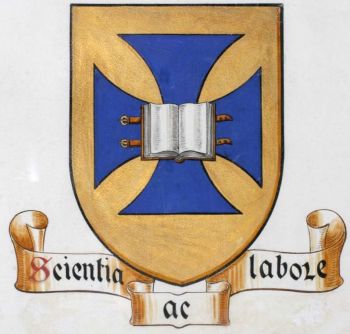 The University of Queensland was inaugurated in 1909. The process of selecting a coat of arms and motto began as early as June 1910 with consideration of a seal and motto.

In June 1911 Sir William MacGregor (the first chairman) wrote to the Secretary of State for the Colonies as to the process of acquiring a coat of arms. The request for arms was forwarded to H. Farnham Burke, Norroy King of Arms at the Herald’s College. Mr. Burke replied, suggesting he was happy to proceed with the matter and “that the design should include an open book, a device which occurs in the Arms of many Universities in this country”.
By early December 1911 a rough sketch of the proposed arms had been forwarded to Burke. Though no copy of this sketch remains extant, correspondence suggests it contained the essential elements of the current coat of arms: the cross and open book on a shield and the motto Scientia ac Labore. The cross is identical to the State Badge located on the official Queensland flag.
A coloured illustration of the proposed arms was made by the Herald’s College and sent to the Committee on the 16th January, 1912. After requesting a slight alteration of the cross, the design was approved and granted in 1912.

The motto was an early consideration. Numerous examples of correspondence from willing contributors survive in the University archives, all dated from April to June 1911, suggesting a general call for a suitable motto had been made sometime in March or early April. All the dozens of suggestions are in Latin and reflected lofty scholarly ideals, but the later motto – Scientia ac Labore – is not among them. The precise origins of the motto therefore remain unclear, and later attempts to clarify this matter were unsuccessful. A careful search by the University’s first archivist in the early 1980s also failed to discover any documentation revealing the reason why the current motto was selected.
It is possible to make a reasonable guess as to the intent of the motto, if not with whom it originated. The classical inclinations of the scholarly community in this period, and the desire to echo the practices of august universities such as Oxford and Cambridge, ensured a Latin motto would be selected. More practical and egalitarian ideas, however, about how the University should contribute to the development of Queensland and its economy are also reflected in the phrase ‘by means of knowledge and hard work’. A 1912 memorandum from MacGregor indicated that “The Arms of the University in respect of Cross, Motto, &c., are to run on parallel lines with those of the State”.

Literature: Information brochure of the University of Queensland (undated)