From Heraldry of the World
Your site history : University of Reading
Jump to navigation Jump to search 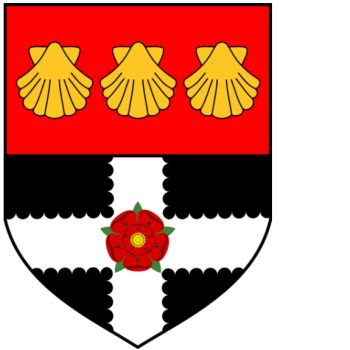 Per fesse gules and sable, in chief three escallops fessewise Or, and in base on a cross engrailed argent a rose of the first barbed and seeded proper.

The arms were officially granted on August 7, 1896 (to the Reading University Extension College and continuedby the whole university).

The arms of the University of Reading were granted when the newly incorporated University Extension College at Reading was still part of Oxford University. This was thirty years before it was granted a Royal charter and became a university in its own right.

The three scallop shells on the upper part of the shield had been the arms of Reading Abbey founded in 1121 and their presence serves as a reminder that the first college was once part of the Abbey.

It is also possible that the scallop shells, a symbol of a pilgrim or 'palmer' might allude to the arms of the local family, the Palmers. Walter Palmer, son of the co-founder of the Huntley and Palmers biscuit firm that came to Reading in the 1840s, was the first President of Reading University Extension College and the family has been and remain benefactors of the University today