From Heraldry of the World
Your site history : University of St. Andrews
Jump to navigation Jump to search 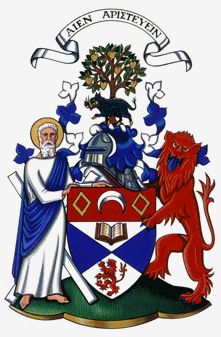 The crescent moon represents Peter de Luna, the given name of Pope Benedict XIII who issued the bulls of foundation of the University in 1413.
The lion rampant is taken from the Royal Arms of Scotland and represents the royal authority of King James I (1406-1437) who was associated with the foundation.
The gold diamonds (mascles or) are taken from the personal arms of Henry Wardlaw, Bishop of St Andrews 1404-1440 who issued the original charter which incorporated the Studium Generale in 1411/12.
The open book with the red page edges represents learning and the blue and silver cross represents the saltire of Scotland.

The crest with mantling and an apple tree with the boar of St Andrews represents the tree of knowledge and the town of St Andrews.