From Heraldry of the World
Your site history : University of Sydney
Jump to navigation Jump to search 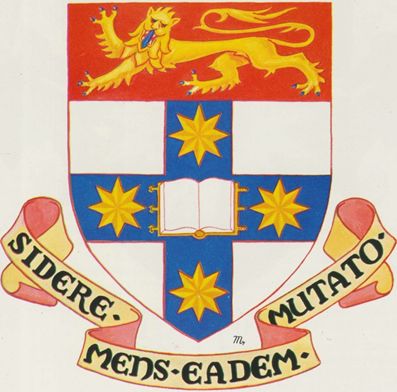 Argent on a Cross Azure and open book proper, clasps Gold, between four Stars of eight points Or, on a chief Gules a Lion passant Guardant also Or, together with this motto "Sidere mens eadem mutato

The lion in the top third of the shield ("the chief" in heraldic terms) symbolised England and Cambridge simultaneously.

The open book in the centre of the cross was said to be taken from the arms of Oxford, although it is used extensively in academic arms.

The blue cross with stars had been used for some time as an unofficial symbol for New South Wales, although there were usually five stars, one in the centre and one on each arm, and these stars were either five- or six-pointed.

The motto, "Sidere Mens Eadem Mutato" as devised by Merewether was left unchanged.