From Heraldry of the World
Your site history : University of Trinity College - Faculty of Divinity
Jump to navigation Jump to search 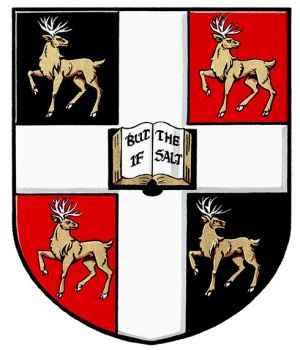 Arms : Quarterly Sable and Gules on a cross Argent between four stags trippant reguardant Or attired and unguled Argent, an open book Argent edged Or, bound and inscribed BUT IF THE SALT in letters Sable
Motto:

The shield resembles a design assumed by Trinity University between 1889 and 1904, and carved as such on the east side of Henderson Tower at the college building. It uses, as a reference to the founder, the Rt. Rev. John Strachan, the form of a stag used in the grant to the University of Trinity College in 1988. Trinity University was a body established in 1889 by the University of Trinity College to grant degrees in seven faculties. The degree-granting powers in six faculties were eventually surrendered to the University of Toronto, but the fact that the Faculty of Divinity continues to grant degrees makes it the remnant of Trinity University, a situation reflected in this design. These arms recognize the venerable student tradition of “red and black” as college colours, with predominance given to black as a traditional clergy colour. At the centre, the open book makes a reference to the Holy Bible.

BUT IF THE SALT is taken from Matthew 5:13 (“but if the salt have lost his savour, wherewith shall it be salted”), and forms an apt reply from the Faculty of Divinity and its students to the undergraduates at Trinity College, whose student cry, based on a phrase in the same biblical verse, begins with the words “We are the salt of the earth”. Following a tradition in academic heraldry, the motto is placed on a book that is part of the shield design.