From Heraldry of the World
Your site history : University of Wales
Jump to navigation Jump to search 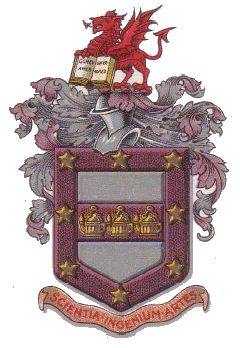 Arms: Argent on a Fesse Murrey three Medieval Lamps Or all within a Bordure of the second charged with eight Mullets of the third. Crest: On a Wreath of the Colours A Dragon statant Gules resting the dexter claw on an Open Book proper inscribed with the words Goreu Awen Gwirionedd.
Motto : Scientia Ingenium Artes

The lamps in the design signify the three Constituent Colleges in being when the University was established in 1893. The eight mullets or stars represent the elements which made up the original University Court.

The legend below the shield, Scientia Ingenium Artes, may be understood as summarizing at once the qualities of the ideal student and three of the chief areas of university study (Arts, Science and Engineering). The words inscribed on the book are those of the University motto, Goreu Awen Gwirionedd - The Best Inspiration is Truth.