From Heraldry of the World
Your site history : University of Warwick
Jump to navigation Jump to search 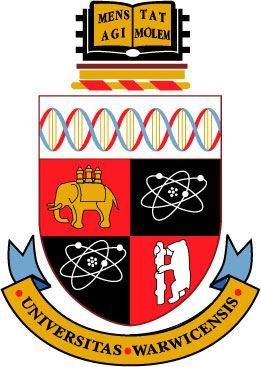 Arms : Quarterly gules and sable, in the first quarter an elephant statant, on the back a castle triple towered, Or, in the second and third quarters representations of the two isotopes of lithium, that in the second quarter having six and that in the third seven protons and neutrons in its nucleus, with electrons in orbit, argent, in the fourth quarter a bear and ragged staff argent, muzzled gules, collared and chained Or; on a chief argent a representation of a DNA double helix, spirals azure lined gules, with connecting lines gold.
Crest: On a wreath of the colours, An open book bound and clasped argent, the pages Or, inscribed thereon in Roman capitals sable MENS AGITAT MOLEM, and resting on a book fesswise argent, the foredge to the front Or.
Motto : On an escrol beneath the shield the words UNIVERSITAS WARWICENSIS.

If you have any information on these arms of Warwick mail us !