From Heraldry of the World
Your site history : University of Western Ontario
Jump to navigation Jump to search 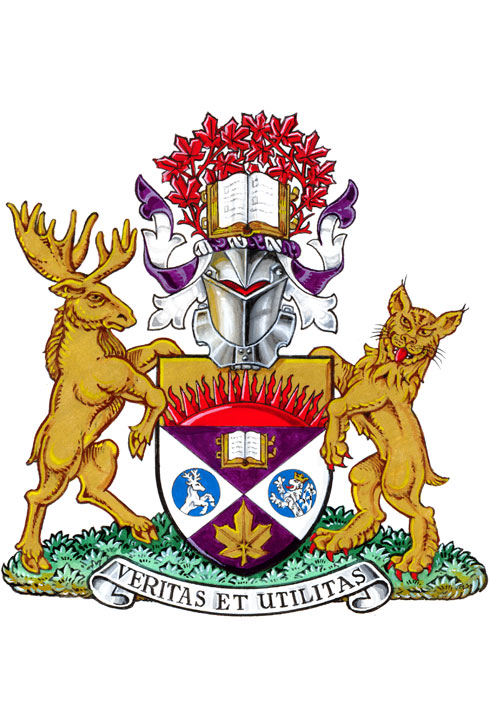 Arms: Per saltire Purpure and Argent in chief an open book proper edged and clasped Or in fess two hurts that to the dexter charged with a demi-stag contourné Argent that to the sinister charged with a demi-lion double-queued Ermine ducally crowned and in base a maple leaf, on a chief Or a sun rising Gules.
Crest: In front of a branch of maple Gules an open book proper edged and clasped Or.
Supporters: Dexter a moose, sinister a lynx Or.
Motto: VERITAS ET UTILITAS

Purple and white are the university’s colours. The open book is a symbol of education, and the maple leaf refers to Canada. The stag is one of the supporters of the coat of arms used by the city of London, Ontario, since 1840. The double-tailed crowned lion in ermine is taken from the arms used by the Rev. Canon Alfred Peache, an early benefactor of the university. The rising sun symbolizes the aspirations of young graduates.

The branch of maple and the open book are Canadian and educational references.

The moose and lynx are Canadian animals, the moose being one of the supporters of the arms of Ontario.