From Heraldry of the World
Your site history : University of Windsor - Canterbury College
Jump to navigation Jump to search 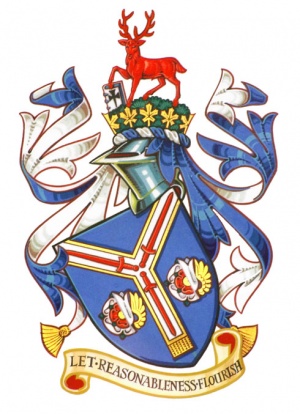 Arms : Azure on a pall Argent edged and fringed Or between two roses Argent barbed and seeded proper each charged with a like rose Gules and dimidiating a lily flower slipped proper winged Or three swords in pairle points outward Gules
Crest : Within a circlet of maple leaves Or a mount Vert thereon a deer statant guardant Gules supporting with the dexter hoof a book Argent garnished Azure charged with a cross paty fitchy Sable
Motto: LET REASONABLENESS FLOURISH

The pall refers to the arms of the college’s namesake, the Archdiocese of Canterbury, in England. The swords, an attribute of Saint Paul, appear on the arms of the Anglican Diocese of Huron, whose cathedral is dedicated to the saint; they identify the College’s affiliation with the Diocese. The rose is an emblem of Windsor, nicknamed the “city of roses”. The winged fleur-de-lis appears on the coats of arms of Assumption University, with which Canterbury College affiliated in 1957, and of the University of Windsor, with which both Assumption University and Canterbury College are now affiliated. Together, the fleur-de-lis and the rose represent the bilingual and bicultural heritage of the Windsor area.

The deer is a symbol of Trinity College, Toronto, the first Anglican college in Ontario. It also appears in the coats of arms of Windsor and Ontario. The book represents knowledge and teaching, while the green mount symbolizes the fields of Essex County. The coronet of maple leaves suggests Canada’s unity and diversity.