University of the West-Indies

From Heraldry of the World
Your site history : University of the West-Indies
Jump to navigation Jump to search

UNIVERSITY OF THE WEST-INDIES 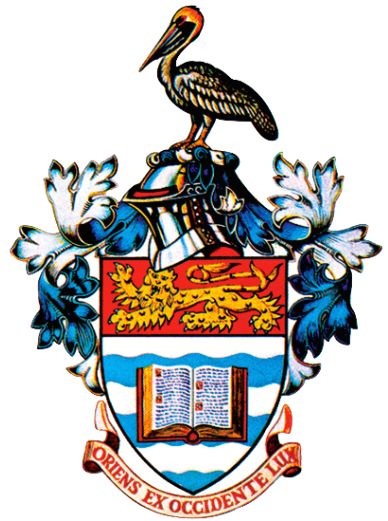 The arms were designed around 1947 by H. Ellis Tomlinson upon the request of the Provisional Council of the University College of the West Indies for the sum of 120 Guineas. In a letter from Tomlinson to Walter Adams of the Colonial Office from 7th February 1947, Tomlinson proposed several designs and concepts that may be used. These included seven crowns to represent the seven regions to be served by the university, namely three islands (Barbados, Jamaica and Trinidad), two island groups (Leeward Islands and Windward Islands) and two mainland colonies (British Guiana and British Honduras).

The final design was approved in January of 1949.

The lion in chief is a symbol of the British monarchy, differenced with erminois. Ermine spots also appear on the label of the arms of Princess Alice, the first Chancellor of the University of the West-Indies.

The crest of the arms, a brown pelican, is a “bird found all over the Caribbean and is a traditional symbol of piety”, according to the designer of the arms.

Literature: Proposals and meaning information from the archives website of the university.