From Heraldry of the World
Your site history : Vale of White Horse
Jump to navigation Jump to search 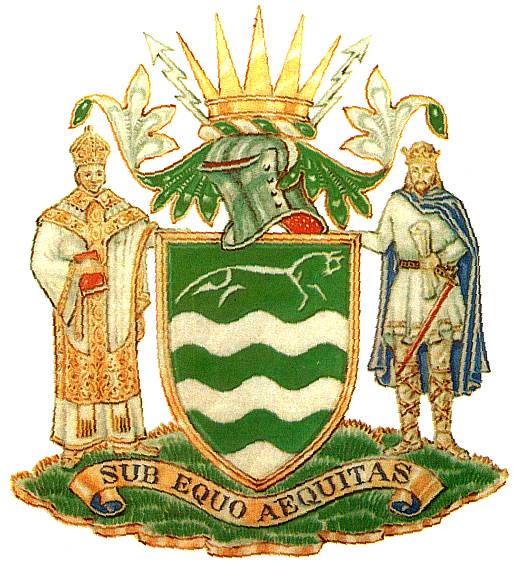 Arms : Argent two Bars wavy on a Chief wavy Vert a representation of the White Horse of Uffington facing to the sinister proper.
Crest : On a Wreath of the Colours an Ancient Crown Or between two Lightning Flashes Argent.
Supporters : On the dexter side a mitred Abbot proper holding a Book Gules and on the sinister side a Saxon King proper crowned Or habited Argent and cloaked Azure girt with a Sword in its Scabbard Gules the hilt and pommel Or and holding in the Sinister hand a Scroll Argent.
Motto: 'SUB EQUO AEQUITAS' - Under the horse there is equity.

The Vale is named after the White Horse of Uffington, carved into the chalk hillside. The wavy bars are for the rivers of the Vale.

The crest features an ancient crown, for the links with Anglo Saxon royalty of the district. The crown is between two lightning flashes for the atomic research carried on in the district.

The dexter supporter is a mitred abbot, for Abingdon Abbey. The sinister supporter is King Alfred the Great, born in Wantage in AD 849. He holds a scroll recording his role as a law maker.

The motto - SUB EQUO AEQUITAS - means "Under the Horse there is Equity".