From Heraldry of the World
Your site history : Volkmarsen
Jump to navigation Jump to search 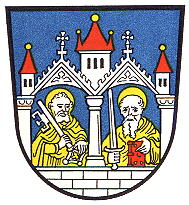 Volkmarsen was first mentioned as a city in 1240 and the oldest seal is known since 1272. The seal shows two man sitting on a bench, a Lord (the Count of Everstein) and an abbot (the Abbot of Corvey), symbolising the two rulers over the city.
The second seal, dating from the mid 14th century, shows a church with two windows and in the windows to religious persons, most likely the Archbishop of Köln and the Abbot of Corvey, as at the time the Archbishop of Köln had replaced the Counts of Everstein.

Later the two figures were replaced by the local patron saints St. Peter (with a key) and St. Paul (with a sword). The latter composition was placed in a shield in the 19th centyury.