From Heraldry of the World
Your site history : Ticino > Wallis
Jump to navigation Jump to search 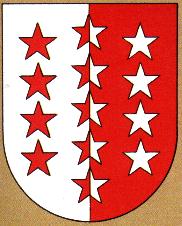 The County Wallis was given to the diocese of Sion (Sitten) in 999 by emperor Rudolf III. The historical arms of the diocese were derived from its banner and were divided of silver and red.
The oldest known separate arms for the county Wallis dates from 1507, it shows a divided shield with 9 stars, five to the right and 4 on the left half. A slightly later manuscript (between 1511-1519) mentions arms with 6 stars. Later 16th century sources all show a divided shield, but the number of stars varies widely, images with 6,7,9,11 and 16 stars are known.In the late 16th century Wallis became an independent republic, and the oldest seal dates from the same year. It shows the arms with 7 stars (see below).

Most later images until the late 18th century show the same arms, only rarely a different number of stars is mentioned.
On a late 18th century seal the composition is the same as in 1582, but the stars now are five-pointed instead of six-pointed as in nearly all previous images.

In 1798 Wallis was incorporated into France and in 1802 it was again made a republic. The new state was divided in 12 districts and the new arms showed now 12 stars instead of 7.

The new canton adopted arms on May 12, 1815. The arms were still divided in silver and red, but now showed 13 stars. The 13th star represented the new district of Conthey (Gundis). The arms have not changed since.