From Heraldry of the World
Your site history : Walmer
Jump to navigation Jump to search 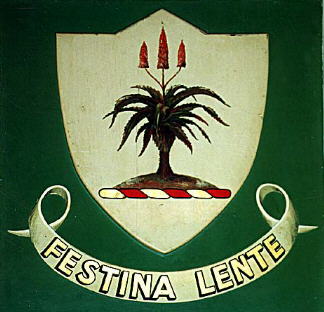 The Aloe ferox is a striking example of the indigenous flora in Walmer and in many other parts of the Eastern Cape.

The Walmer Town Council used a coat of arms comprising a shield and motto only, without a crest. However, the device on the shield is clearly a crest, since it stands on a crest-wreath or torse. In the one illustration the torse is gold and red, in the other white (silver) and red. These anomalies are an indication that, despite the admirable simplicity of the design, it can at no time have been registered with any heraldic authority.

It could, however, have been registered with the Department of National Education, which was not fussy about the "badges" it put on its books.