From Heraldry of the World
Your site history : Waterford (county)
Jump to navigation Jump to search 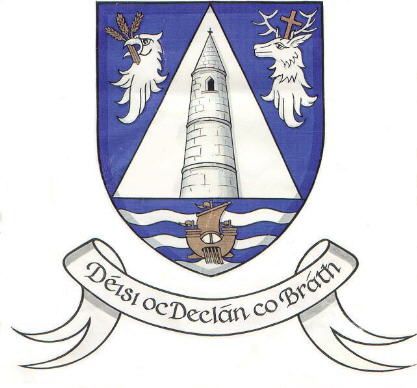 The round tower symbolises Saint Declan and recalls the celebrated monastic foundation at Ardmore.

The Deisi is typified by the eagle's head with three ears of wheat in his mouth, being the ancient crest of a Faolain, principal family of the Deise.

The stag's head with the cross of Saint Hubertis taken from rest of the great Hiberno-Norman family of Power.

The word lymphad actually comes from the Irish long fhada, and is a common charge in Gaelic heraldry.

The motto "Déisi oc Declan co Brath" is taken from a ninth century life of Saint Decian with the text in the Old Irish and means "May the Déise remain with Decian forever".