From Heraldry of the World
Your site history : Watford Grammar School
Jump to navigation Jump to search 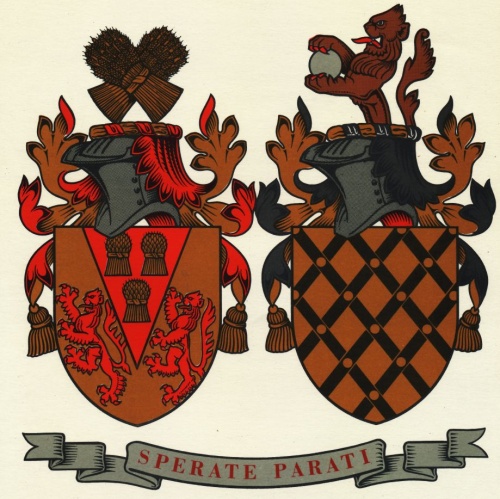 Arms : Dexter : Or, on a pile between two lions rampant gules, three garbs of the field. Sinister : Or, fretty sable, at each intersection a plate.
Crest : Dexter : On a wreath of the colours, two garbs in saltire or. Sinister : On a wreath of the colours, a demi-lion rampant proper, holding in its paws a plate.
Motto: SPERATE PARATI ("Hope-being well prepared").

Watford Grammar School has no official arms, but displays the two shields of Chilcot and Platt families. The main school was founded in 1704 by Elizabeth Fuller, daughter of John Chilcot for the poor children of Watford. In 1878, the Commission forbad the school from admitting any more pupils in its current state, and asked the trustees to choose between turning the school into a public elementary school or amalgamating with a sum of £13,333/6/8d from the Platt Foundation for Aldenham School to form a new middle class school. The Platt foundation was founded by Richard Platt, also founder of Aldenham School in 1597.