From Heraldry of the World
Your site history : Waverley (Surrey)
Jump to navigation Jump to search 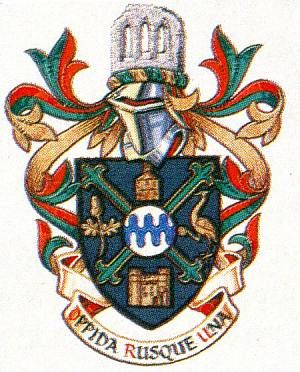 Arms : Sable a Cross flory saltirewise Vert fimbriated Or surmounted of a Plate thereon a Bar undy Azure between in chief a representationof the Town Hall at Godalming and in base of Fox's Tower at Farnham Castle in dexter flank an Oak Sprig fructed of an Acorn and in sinister flank a Crane in its vigilance all Gold.
Crest : On a Wreath Or and Vert a representation of the ruined east end of Waverley Abbey pierced with three lancet windows all proper Mantled Gules and Vert doubled Or.
Motto: 'OPPIDA RUSQUE UNA' - Town and countryside in unity

The arms were officially granted on September 6, 1985.

Waverley's coat of arms is a shield quartered with a fleur-de-lis cross and each quarter shows a symbol denoting the four principal areas of the Borough. They are the Pepperpot for Godalming, Farnham's castle, the Cranleigh crane and oak leaves for Haslemere. The river Wey, which flows through the borough, is represented by a wavy blue line - thus forming a canting element. At the top of the crest are the three lancet windows from the ruins of Waverley Abbey.