From Heraldry of the World
Your site history : Weiswampach
Jump to navigation Jump to search 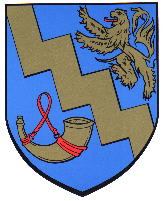 The bend is derived from the arms of the Reuland Estate, which was the largest part of the present municipality until 1793. The lion is the lion of Nassau, for the possessions of the Counts of Nassau-Vianden in the area. The horn is taken from one of the moist influential families of the village, the Kleffer family. It is also a symbol of the postal service, as a major post sorting station is situated in Weiswampach.