From Heraldry of the World
Your site history : West Midlands Police
Jump to navigation Jump to search 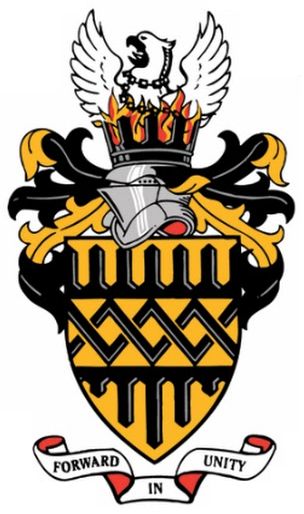 Arms : Or between two Bars vallary as many Barrulets dancetty of three points interlaced Sable.
Crest: Out of a Crown Vallary Sable a Phoenix Argent rising from Flames proper and about the neck a Chain pendent reflexed across the breast also Sable.
Motto: FORWARD IN UNITY

The arms were officially granted in 1980.

The gold and black of the shield represent industry, the fretwork forms the letters W and M and the barrulets symbolize strength — all charges from the West Midlands County Council arms. The bars and crown vallary represent protection and security and the phoenix crest is identical to the Council's supporters.

The motto is also that of the County Council