From Heraldry of the World
Your site history : Westminster College
Jump to navigation Jump to search 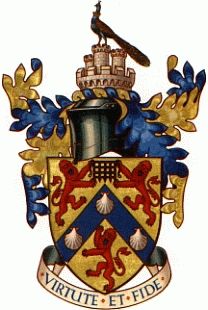 Arms: Or, on a chevron azure three escallops argent, between in chief two lions rampant guardant, the dexter contourne gules, supporting with their forepaws a portcullis chained sable, studded of the fourth, and i·n base a lion rampant guardant also gules.
Crest: On a wreath of the colours, The battlements of a tower triple-towered argent, standing upon the centre tower a peacock proper, ducally gorged Or.
Motto: Virtute et fide

The arms were officially granted on September 6, 1956.

The College's previous arms were unregistered and much was incorporated into the above arms. The Blue Chevron was retained, representing the River Thames, common to both Oxford and London, where the College was based until 1959. Scallops replaced the Tudor roses, being the symbol of the pilgrim and found on the Wesley family arms and those of Kingswood School, Bath.

The Portcullis, taken from the arms of the City of Westminster, was retained. The lions derive from their association with the Grosvenor family, Dukes of Westminster.

The triple-towered castle may represent the Bible, the College being a Christian foundation, whilst the peacock is the personal emblem of the Harcourt family, from whom the present site on Harcourt Hill was obtained.