From Heraldry of the World
Your site history : Weston-super-Mare
Jump to navigation Jump to search 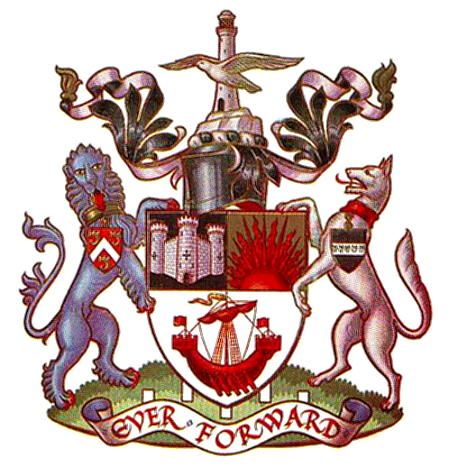 Arms: Per Fesse Or and Argent in chief to the sinister a Setting Sun issuant Gules and in base a Lymphad also Gules on a quarter Sable a Castle of three Towers Silver.
Crest: On a Wreath Argent and Sable in front of a Lighthouse set upon a Rock a Seagull volant proper.
Supporters: On the dexter side a Lion guardant Azure collared Or pendent therefrom by a Chain also Or an Escutcheon Gules charged with a Chevron Argent between three Clarions Gold and on the sinister side a Wolf Argent collared Gules pendent therefrom by a Chain Or an Escutcheon Sable charged with a Fesse Ermine
Motto: 'EVER FORWARD'.

The upper part of the shield is divided vertically into two. The left-hand section shows a white or silver castle with three towers on a black field, based on the expression used of Weston-super-Mare "fair white city by the Severn Sea".

The right-hand section shows "the sun in its splendour"; the red sun setting against a golden or yellow field, refers to the exceptionally beautiful sunsets over the sea which interested the painter J. M. W. Turner.
In the lower part of the shield is an ancient galley coloured red on a white field alluding to the maritime trading in bygone days of the old Port of Hubba's Pill (now Uphill).

The crest, which typifies a seaside resort, consists of a lighthouse standing upon a rock with a seagull in the natural colours, flying in front of it. This refers also to a distinguishing characteristic of Flat Holm, one of the two small islands, which form a prominent feature of Weston Bay. The crest is the only element taken from the previous arms (see below).

The supporters on either side of the shield are, on the left a blue lion with its head turned facing the viewer, and with a golden collar round its neck, from which depends by a golden chain a red shield charged with a white or silver chevron between three golden clarions-the arms of the Arthur family.
The supporter on the right-hand side is a white or silver wolf with a red collar from which hangs by a golden chain a black shield charged with a bar charged with ermine spots of black-the arms of the Winter family.

The previous arms were officially granted in 1928, with the crest and supporters added in 1937.

Arms: Azure, on a gold fess a setting sun gules; in chief a silver sailing ship and an oak tree proper growing on a mount vert strewn with silver billets; and in base three swimming herrings argent.
Crest: On a Wreath gold and azure, a lighthouse on a rock with water at its base, and in front of the lighthouse a flying seagull proper.
Supporters: Dexter, a fisherman holding in his right hand a coil of rope; and sinister, an Ancient Briton with a spear in his hand, all proper.
Motto: 'EVER FORWARD'. 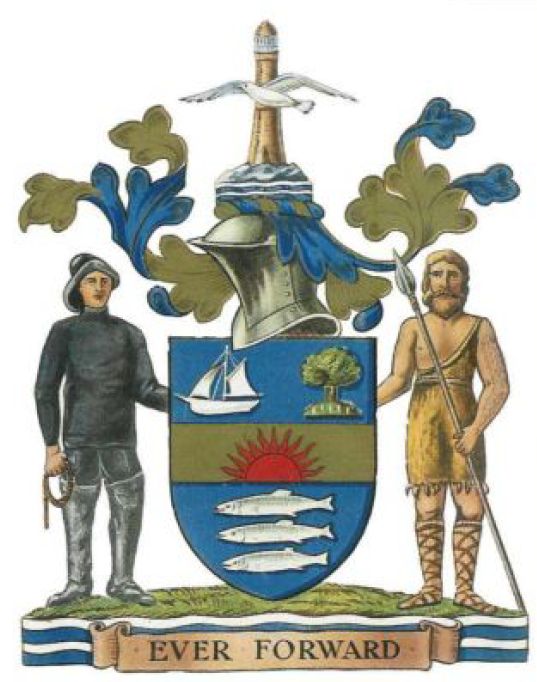 The arms (unfortunately I have no colour image) show elements of fisheries (boat, fish, crest), as well as a tree for the local woodlands. The setting sun denotes the west country and the splendour of its evening skies.

The supporters are an ancient Briton for the long history of the borough and a fisherman.

Before 1928 the borough used the arms shown below with a sun above a sea.