From Heraldry of the World
Your site history : Wexford (county)
Jump to navigation Jump to search 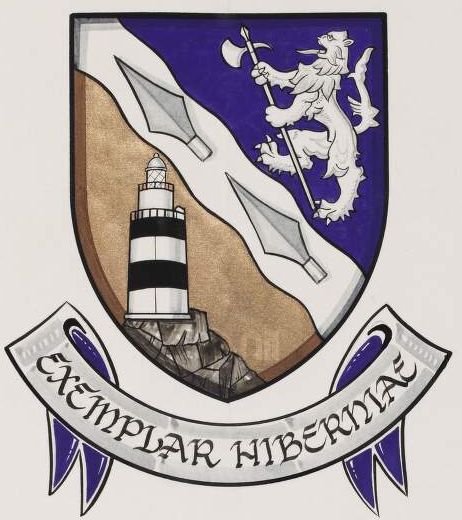 Per bend purpure and or, on a bend wavy argent between in chief a lion rampant holding in the paws a pike of the last and on rocks in base a representation of the Hook lighthouse all proper, two spearheads bendwise points upwards also proper. Motto : Exemplar Hiberniae.

The arms are in the county's sporting colours of purple and gold. The lion with an axe reminds us that the Norman invaders of Ireland first set foot here, and that Wexford town itself is a Viking foundation. The spear heads recall the pikemen of the 1798 revolution which reached its height in the County. The lighthouse reminds us of the county's maritime connections in particular the major port at Rosslare.

The motto "Exemplar Hiberniae" means "An Example to Ireland".