From Heraldry of the World
Your site history : Widnes
Jump to navigation Jump to search 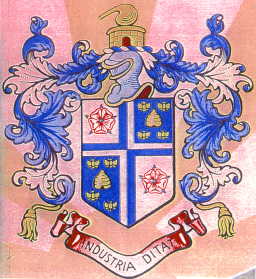 Arms : Quarterly Argent and Azure a Cross per cross quarterly counterchanged in the first and fourth quarters a Rose Gules barbed and seeded proper and in the second and third a Beehive between four Bees volant saltirewise Or.
Crest : On a Wreath of the Colours a Furnace thereon an Alembic all Or.
Motto: 'INDUSTRIA DITAT' - Industry enriches.

The red roses refer to the Lancashire County connection and the bees are emblems of industry.

The furnace and alembic, an old piece of distilling apparatus, refer to the particular form of industry for which Widnes is noted, namely alkali and soap manufacture.